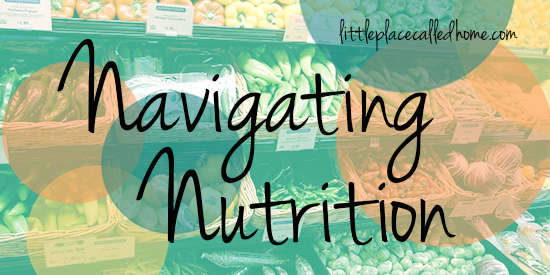 I’m standing in a grocery store aisle trying to pick out some snacks for my husband to take to work. They need to be filling and substantial, but I feel like they should also be healthy. So I stand around and consider labels. This snack is “all-natural” but full of soy. Didn’t I read somewhere that soy is bad for you? This one is low-fat, but full of sodium. This one is low sodium, but has a million preservatives. I suppose I could just get an apple, but isn’t fruit high in sugar?

Does this feel familiar to anyone?

A few years ago I started reading more about healthy eating and nutrition. I’ve learned a lot since then, but many I times I think my life was easier before I knew anything about food. Every nutritional recommendation seems to contradict another recommendation. How is someone ever supposed to know how to eat?

So, I’ve decided to start a new series on this blog dedicated to sorting out the different opinions on eating healthy. Every few weeks I’ll explore a different food group and gather together the opinions of all the various “health experts” out there. I’ll be learning right along with you, but I hope that this process will help us all find some overarching themes or guidelines that will lead to practical steps we can make toward a healthier lifestyle.

I’ve decided to narrow this exploration down to some of the more common or popular diets around these days.

We’ll start off with the food pyramid, that ideal set forth by someone in our government for how all Americans should eat. I’m already skeptical of the value of this diet, seeing as how America has a serious problem with health, but then again, how many people actually follow the food pyramid? I’m interested to see how this standard compares to all the other diets out there.

I’m going to include a couple of diabetes diets because that’s a reality we have to contend with in our own home. My husband has diabetes and is dependent on insulin. The American Diabetes Association has long been the organization responsible for setting forth guidelines to help people manage their diabetes. This diet is supposed to help people manage weight and reduce the risk of diabetes complications, like heart disease or stroke.

I read Dr. Bernstein’s book [*The Diabetes Solution*](http://www.amazon.com/gp/product/0316182699/ref=as_li_ss_tl?ie=UTF8&camp=1789&creative=390957&creativeASIN=0316182699&linkCode=as2&tag=litplacalhom-20) (*affiliate link*) a while ago and he is very critical of the diet guidelines set forth by the American Diabetes Association. After learning how to control his own diabetes and then treating many patients over the years, he feels that all foods that can cause a rapid rise in blood sugar should be avoided. He claims that following his diet will keep a diabetic at fairly normal blood sugar levels and greatly decrease the risk of diabetes complications. This is basically a low-carb diet, but catered to the specific needs of diabetics. I’m interested to see how it compares to other diets on the list.

Paleo diets have gotten a lot of attention recently and have been popularized the by [Whole30](http://whole9life.com/category/whole-30/) program. This diet claims that humans have not physically evolved at the same rate as agricultural methods, and our bodies are not suited to process much of the food available these days. So a Paleo diet supposedly only allows those things that our hunter/gatherer ancestors ate—think lots of veggies with a healthy side of meat. People who follow this diet claim to feel better than they ever have, with more energy, more mental clarity, fewer health issues, and of course, a healthier weight. The concept is interesting to me, but when reading the “rules” of this diet it seems like it might be difficult to implement on a regular basis.

This is a diet I read about in depth in a book called [*Nourishing Traditions*](http://www.amazon.com/gp/product/0967089735/ref=as_li_qf_sp_asin_il_tl?ie=UTF8&camp=1789&creative=9325&creativeASIN=0967089735&linkCode=as2&tag=litplacalhom-20) (*affiliate link*). It is based on the research done by Weston A. Price. He was a dentist (of all things) who spent a lot of time working with and observing traditional indigenous cultures around the world. Apparently the state of a person’s teeth can tell a lot about their overall health. He noticed that people in these cultures ate very differently than many more modernized cultures, and they also suffered far less from many of the health problems seen so frequently in America, such as heart disease, cancer, autoimmune disorders, bad teeth, and the like. He distilled all this research down into some recommendations for healthy eating, not only looking at the foods eaten, but also at how they are prepared.

This is a diet I’ve only looked into briefly so far. It lays forth some very strict guidelines and is often used by people as a type of cleansing diet. It also claims to cure people of autoimmune disorders – which is a pretty lofty claim. I’m including it mainly because I find it fascinating and would like to learn more about it.

A vegan diet leaves out all animal products. Most people who choose to become vegan do so for ethical reasons, but many claim that it has a lot of health benefits as well. People claim to lose weight, have better skin, and a happier digestive system. I personally love meat and cheese, so I will probably never go entirely vegan, but I thought it would make for a good comparison.

It seems like this diet has come and gone as a fad diet for years. However, it comes up often enough that it seems like it might have some value. It is based on the idea that people living in Mediterranean cultures (Italy, Greece, France, etc.) have much healthier weights than many Americans. By emulating the types of food they eat, Americans should have healthy weights too. I also suspect that this diet is popular because Mediterranean food is tasty and generally comes with wine.

I’m excited to dig deeper into each of these diets and try to figure out what really makes up a healthy eating lifestyle. Come back next week when I’ll kick off the comparison by looking into one of the most confusing food groups: Grains.