Book Review: All the Light We Cannot See 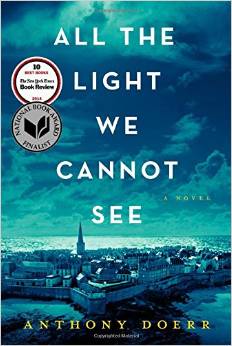 I have to say, I started the 2015 Reading Challenge with a good one. Chris and I chose “a book that is currently on the best-seller list” as the first category of the challenge to complete. I went with All the Light We Cannot See by Anthony Doerr. I had no great expectations for it. It was just one of the few books on the list that didn’t seem to center on a murder or crime, so that’s what I picked.

The story is set in Europe during WWII and is told from the perspectives of two different characters – children really – who come of age during the height of WWII. The first is a blind French girl who flees Paris during the Nazi invasion with her father who may or may not be in possession of a cursed diamond. The second is a German orphan boy who escapes his fate of working in the coal mines when his gift at working with radios and mechanics awards him a spot at a prestigious school for the Hitler Youth.

The 500 some pages in the book go by quickly. It’s an easy read, but definitely not fluff. The chapters are short and go back and forth between the girl and the boy, the beginning of the war and the end. It was fascinating to watch the story unfold and reveal how these two separate lives would intersect.

At one point near the end of the book I told Chris that either there was going to be some kind of miracle, or everyone was going to die. It turned out to have some of both. There was a bit of the miraculous. There was a bit of the sad. Some people lived and some people died. Everyone came out of the war with some scars. But many also learned how very strong they could be.

If you’re looking for a book to read, I would definitely recommend this one.