From Model Student to Aspiring Unschooler: What my success in the traditional school system taught me about its shortcomings

I was one of those students that most people secretly hate. I got straight A’s. I scored in the top percentiles on aptitude tests. I consistently set the curve in my classes. While I worked hard, learning material and showing what I learned on assessments came easily to me so I rarely experienced any failures. I went through the traditional public school system from kindergarten to graduation and left feeling like a complete success.

**Now that I’m a mother and contemplating my own child’s future education, I’ve realized I don’t want him to have the same experience.**

This may seem strange. I did great in school! I was successful! Why wouldn’t I want the same thing for my child? After all, most people who have issues with the public school system were kids who did not succeed. They had needs that were not being met or styles of learning that were not being taught to. But I thrived in the traditional classroom. Tell me to sit quietly and listen to someone lecture and retain as much information as I can, and I am on it! I could do that all day. And I did for 17 years. But now, I just don’t think the system, the system that labeled me as highly successful, is really the best thing for kids.

Once I got out in the real world I really wasn’t too worried about my chances for success. I had been told all my life that a good education would be all I really needed to get by in life. I had gotten a good education, and I had the grade point average to prove it. But guess what, as it turns out, **test taking is not an essential life skill.** Imagine the shock to my system when I realized that the skill that had gotten me the farthest was now virtually useless. I realized I had never heard of a way to get paid just by passing tests or answering questions. I’ve since learned that in the traditional school system, **success is measured according to skills that do not predict success in the real world.**

After realizing that test taking wasn’t going to get me anywhere in life, I had a bit of an identity crisis and started to wonder about who I was and what I loved. You see, when I went through school I was very focused on academics. I thought that was the way to get into a good college and then get a good job. So my schedule always consisted of the challenging classes, which were usually focused on math and science. I automatically assumed I really liked math and science. **But I think in reality I liked being successful. I liked being “smart”.** And those classes were the easiest way to show that off. But I never really explored other subjects. I ignored subjects like art because they were the “fluff” classes. I may have paid more attention to English if there had been more advanced electives at my school, but really, if you wanted to take hard classes and get to the top of the class, math and science was the way to go. It was obvious that the school system put more value on those subjects and **I was never really encouraged to explore other things.** I was good at the hard stuff, so I believed that’s what I should be doing.

After a few years of self-discovery, I’ve realized that I do have quite a few valuable skills at my disposal. There are some things that I’ve been taught that have served me well. But what I’ve also realized is that **those skills were taught to me by the people in my life, not textbooks or state standards.** I was never given a test to grade me on my “love of learning” or “good work ethic.” You can’t measure those things. If it had been up to the system I probably would have never learned them. 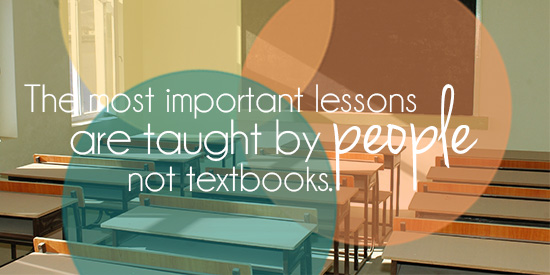 But thankfully, I have a mom who loves to read, and she passed that love on to all of her daughters. She read to us everyday when we were little and satisfied our appetites with frequent trips to the library. I learned from her that you can never have too many books. When I got older and was reading more real literature, she was always the person I would go to for book recommendations and her bookshelf was always available for perusing.

My dad is a biologist and seems to have a head full of knowledge about everything in the world. At least that was my opinion as a kid, which encouraged me to ask a never ending stream of questions with the expectation that they would all get answered. And for the most part he met that expectation. He never acted like a question I asked was silly or that it wasn’t worth answering. And today I still have an insatiable curiosity and the expectation that my questions will get answered. Not necessarily by my dad all the time, but I have faith that the answer is out there somewhere, and I don’t feel silly if I go looking for it.

And even though the *system* may not be setting kids up for success, there are still some really great *teachers* out there who are. These are the people who know the value of skills that can’t be measured. They may not be able to draw up a graph to show how their students are successful in areas like “problem solving” or “critical thinking” but they still work hard to teach those things anyway, all the while having to check off boxes of state standards. These teachers could have a much easier time if they would just teach to the test, but instead they know the value of making their students work hard and tackle challenges. One teacher I had would continually tell us that “stress builds character.” His assignments were huge and complicated and totally stressed me out. But when I finished with one and knew that I had figured out how to meet his expectations I felt extremely proud of myself. And that built confidence that I would be able to tackle the next hard, stressful project in the future.

##I want even more of the good stuff for my kids…

As I’ve learned more about different educational approaches, I’ve found that the philosophy behind “unschooling” resonates deeply with what I’ve decided is important for a child’s future success. It’s also pretty much the opposite of what I experienced. As the name implies, it foregoes most elements of what most people consider “school” and instead trusts that the most important education happens in real life experiences. Some of the things I what to emphasize in my children’s education fit very nicely in this philosophy.

**1. I want my kids to recognize authentic success.** I want them to be proud of themselves, not just for a nice red “A” on a piece of paper, but because they have done something that’s of real value. Whether it’s finding a solution to a problem they’ve been having, or using their skills to help another person.

**2. I want my kids to know what they love.** I want to make sure they have the time, freedom, and encouragement to explore and dive deep into whatever interests them. If they are given this opportunity early on, maybe by the time they get to college they’ve have a better idea than most 18 year olds about what to devote the next 4 years of study (and the thousands of dollars of tuition!) to. And it’s my belief that when a person works within their passions, they are most likely to make a positive impact in the world.

**3. I want my kids to get their education from people who care about them, not from standards and textbooks.** My son is already blessed with a family and community of friends who have a lot to offer him. I want him to have plenty of opportunities to be with these people, see what they do, and soak up their wisdom.

I didn’t always intend to homeschool. In fact, there was a time when I thought I would spend my adult years teaching in a traditional classroom myself. And I in no way believe that children in public school classrooms today are doomed to failure. There are a lot of wonderful, dedicated teachers out there who serve the children in their classrooms in amazing ways. And a lot of wonderful, dedicated parents who make sure their children get the education they need. I just know that there are a lot of opportunities out there that can be overlooked in a classroom. And I don’t want my kids to miss them.

I’ve included this post in the link up at Intentional Homeschool.