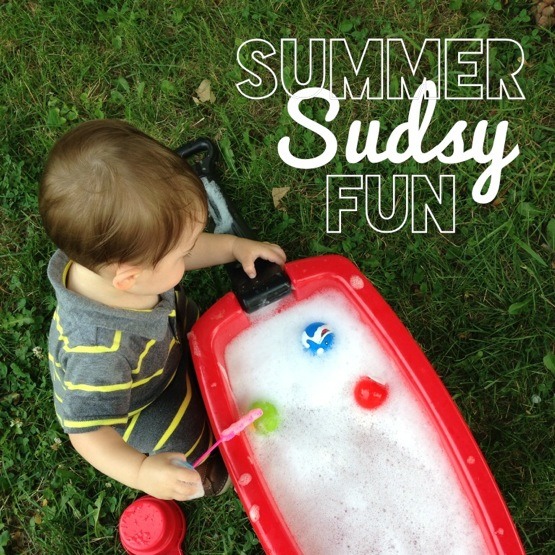 Every now and then I try to be a bit more creative with our play time though. Today we had the water table out, which is fairly normal for a hot sunny day. We also had some bubbles and balls and shovels. But Charlie was starting to get tired of the same old thing. The best idea he could come up with was to take control of the bubble solution bottle. And probably drink some of it. I was not really OK with that idea. I needed to come up with something fun and distracting.

So in a stroke of brilliance, I poured a little bubble solution in the wagon and started spraying the hose to make a wagon full of suds. Charlie was intrigued.

At first he wasn’t quite sure what to think. I took a few of his rubber balls and dropped them in. They got covered by the suds. Charlie was concerned about what had happened to them. I pulled one out. Charlie was concerned that it was still covered with suds. I showed him how I could wash it off in the clear water still in the water table. Charlie felt a bit better. I dropped the ball back in the suds. This time Charlie started to tentatively explore the sudsy wagon. 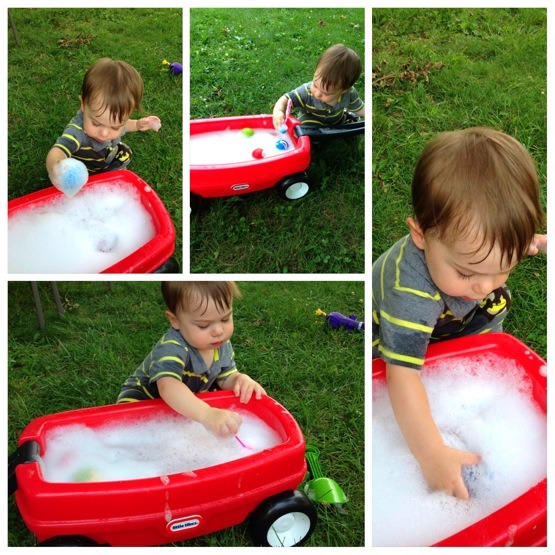 He started just by touching the suds lightly with his hand and looking at how the suds stuck to it. He kept pointing to the suds covered balls that he apparently expected me to rescue. I told him he would have to get them out. Eventually he was pulling the balls out himself. Then he started stirring the suds with his bubble wand. He seemed to be getting into it. But then he walked off in search of some sticks. Well, that didn’t last long.

But then he came back! This time with a stick and a rock to swish around in the suds. He played happily like that for a little while longer until it was time to clean up. I started gathering up the toys and emptied out the wagon. While I was rinsing the wagon out with some clean water Charlie started to indicate that he wasn’t done playing with the wagon. So I left him to it while I picked up some other toys. When I turned around I saw this: 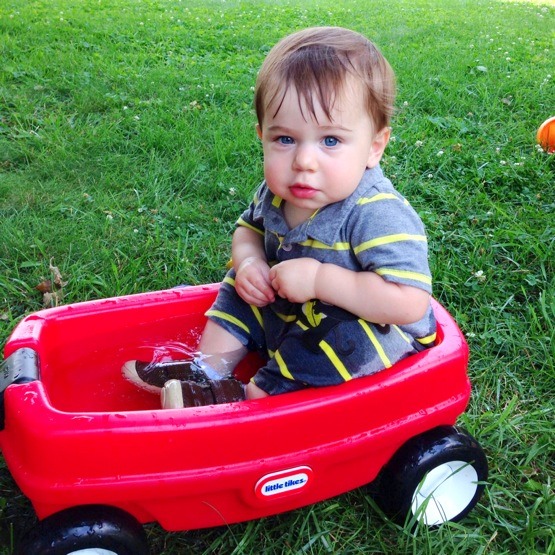 Yep, that’s my boy sitting in a wagon full of water. Fully clothed.

Oh well, it was a hot day and he seemed very happy. I just left him there until I was ready to take him inside and towel him off.

It was a messier playtime than usual, but it was fun and new and Charlie was happy. Success!

I’m linking this post up with Tuesday Tots at Rainy Day Mum. Take a look there for a lot of other fun activities for kids under 5!