This has been a week, you guys.

Normally, my Friday posts are a time to talk about the more trivial things in life. A listing of the positives and the celebrations. But this week it’s been more about the feelings. So let’s talk about it. 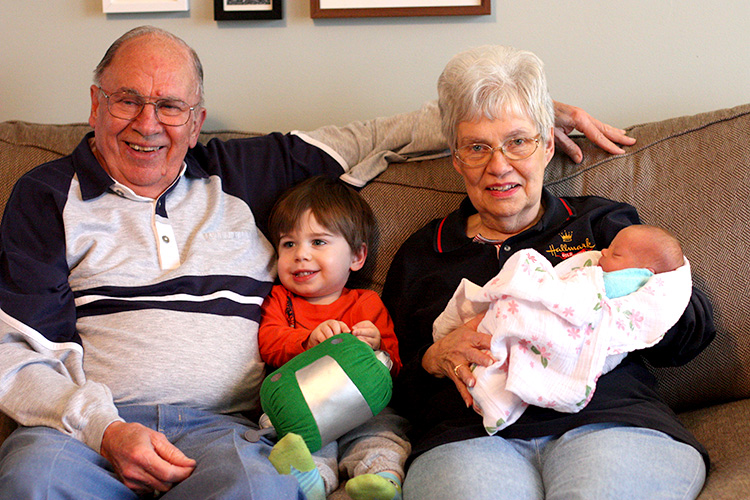 My Aunt Barbara passed away last Thursday morning. It happened so quickly, it’s still hard to believe. Just three weeks earlier she had gone into the hospital with some swelling and difficulty breathing only to learn that she had stage 4 cancer. At first it sounded like we only had a year or two left with her. Then she developed an infection and it was a matter of days, then hours, and then she was gone. My heart aches every time I think of it.

The funerals (there were two) were in Kansas City and her hometown of Warrensburg, MO. Getting out there is about a 9 hour drive on a good day. Add in a detour to drop off a three year old at the in-laws house, and continue on with a 3 month old that needs diaper changes and nursing breaks every couple of hours, and you’ve got yourself a really long trip. We’re still recovering.

At just how much Aunt Barbara loved us. I had always known that my sisters and I were important and special to her. I didn’t realize how much she loved to brag on us to her many friends. There were so many people that we met at the funeral who felt that they had watched us grow up through the eyes of Aunt Barbara. Even though we only got to see Aunt Barbara and Uncle Vernon a few times a year, they thought about us and talked about us and cared about us every day in between.

That we were able to have so much time with family in the time leading up to and during the funerals. If only Aunt Barbara had been there it would have been a truly joyous occasion. My parents and sisters were all there – a feat in and of itself. We spent lots of time with Uncle Vernon. We got to visit with cousins I haven’t seen in years, and I even met some family members for the first time. And I can honestly say that they are all really great people. I wish it hadn’t taken such a sad event to get us all together.

By the life my Aunt Barbara led. At first glance, it doesn’t seem that impressive. She wasn’t an influential leader. She didn’t own her own business, or start her own charity, or live some kind of high profile life. But she made an impact on so many people. Enough to fill two separate funeral homes. All these people came simply because they were loved by her. Her life is a testament to the power and impact a person can have by simply caring for the people you meet along the way – your neighbors. My Aunt Barbara lived in the same house, worked in the same company, attended the same tiny church, and went to the same high school reunions and retiree functions and volunteer opportunities for as long as I knew her and longer. But even though it seemed that nothing much changed in her life, it’s obvious to me now that she changed the lives of the people around her. I’m certain when she met Jesus face to face he said, “Well done, my good and faithful servant.”

In the promise of heaven. I don’t know how people who don’t have a relationship with God and the reality of heaven to look forward to can handle the death of a loved one. As much as I miss Aunt Barbara now, I am comforted in the fact that I will see her again. I’m pretty sure she’s in one of those many rooms organizing her supplies in the most space efficient way possible, making friends with everyone she meets, and preparing a plate of the best chocolate chip cookies in the world to greet us with when we all go to join her.

Filed under: these days